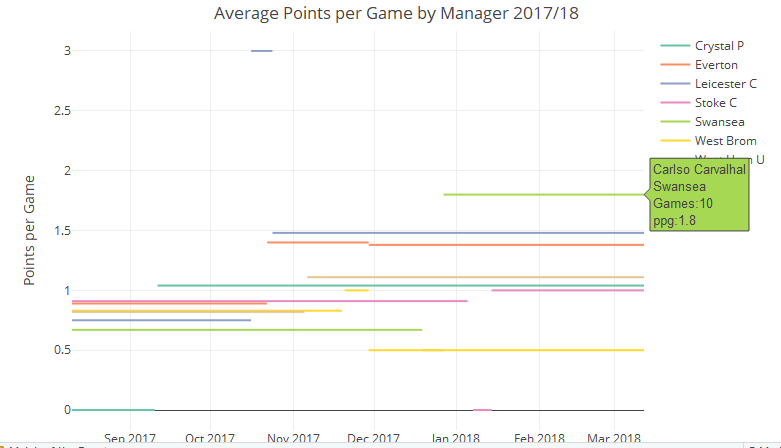 For the remainder of the season, I will be travelling with a back up laptop so please excuse any shortfall in posts and site updates

Match of the Day

Palace joined WBA with a league-leading ninth one-goal defeat. Every team has suffered at least one such occurrence this season. Surprisingly Huddersfield have lost by a single goal just once in their 15 defeats

Several teams have changed manager’s this season in an attempt to acquire a ‘New manger Bounce’. Whether, or not,this concept has any validity (Managers are usually sacked after a bad run and some reversion to mean performance would be expected if they stayed) there has certainly been some significant variation in outcome

Other than Southampton - who may stll decide to take the plunge - and the promoted clubs, all those teams currently in most imminent danger have called in a new guy.

Here are their records

Other than WBA - where Alan Pardew’s managerial career in the Premier League looks set to end - there have been some improvement; Though Stoke’s is marginal and may not suffice to save them

Burnley have proved this season’s good-news story and after a sticky spell are again pushing for a Europa spot. One reason has been the form of new-purchase, Chris Wood, and he came on as a sub, Sturday, to set up the first goal and score two others. Three points in agame for a sub is a pretty rare event - occurring on average just over once a season

N.B. Unlike official statistics, I allow up to two assists per goal

Stand-out performances include Solskjaer’s four goals in 22 minutes and Wigan;s Amr Zaki who pitched in 2 goals and an assist in just 6 minutes in a game versus Hull - a team he was subsequently played for without scoring or assisting on a single goal —

#WHUFC get beaten by three clear goals, third game on trot. Only ever happened 10 times in #premierleague. Exactly a decade ago, the Hammers lost consecutive games 0-4 to #CFC #LFC and #THFC pic.twitter.com/092CjHsHBg